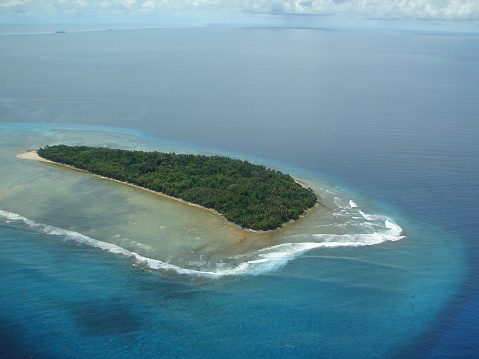 I recently had the honour and privilege of sharing dinner with Mr Christopher Loeak, the ex-President of the Marshall Islands and was afforded a window into the reality of a Marshall Islander. This is not a happy story, rather it is a tragedy that is met with steadfast spirit and resolve offering us an example, and maybe an insight, into how we might behave in our own climate changed futures.

Mr Christopher Loeak was President of the Republic of the Marshall Islands (one of only four low-lying coral atoll nations in the world), and is an Iroij (traditional chief) of the Ralik Island Chain. As President from 2012-2016, Mr Loeak established the Marshall Islands as a world leader in the fight against climate change. In 2013 he hosted the biggest Pacific Islands Leaders’ Meeting in history that resulted in the Majuro Declaration for Climate Leadership which was personally presented to the UN Secretary-General, and in 2014 he attracted worldwide media attention when he released a “video address to the world” in front of a sea wall he had built in front of his family home.  Throughout 2015 Loeak travelled extensively in the lead-up to the COP21 Paris Climate Conference, including to personally meet with United States President Barack Obama, Indian Prime Minister Narendra Modi, and French President Francois Hollande. The Marshall Islands leadership of a ‘High Ambition Coalition’ of more than 100 countries in Paris ultimately proved pivotal, with many key elements of the Paris Agreement first introduced into the negotiating text by Loeak’s team.

As a scientist, we accept evidence based fact and we are often removed from the physical reality of these facts. For example, facts relating to the embodied environmental impacts of products and services; we don’t see them on a daily basis, we don’t experience the reality of the impact allocated to our consumption, they are typically once removed and manifest themselves as an externality elsewhere. We accept the theoretical connection and profess to understanding the impacts. Often, discussions about Climate Change Adaptation seem abstract as we discuss storms, floods and bushfires at the same time as looking out over a Manly harbour decorated with sailing boats. Mostly we are removed from the impacts we work to address. On 23 November 2017, at dinner with Mr Loeak, I was humbled by the reality of a man who experiences the impacts of climate change every day, and whose home/place/land is literally and surely disappearing as the impacts of climate change roll on.

The Marshall Islands is a place that’s beauty is matched by its vulnerability. The Marshalls consist of 29 atoll chains, making 1156 islands in the middle of a volcanic ocean with a population of 70,000. The islands are low lying, with the vast majority of land sitting around 2 metres above a rising sea level.  Marshall Island history is littered with some of humanities greatest horrors including US nuclear bomb testing between 1948 – 1958. Over the course of 12 years, 56 different weapons were tested, with an equivalence of 1.2 Hiroshima scale bombs every day. Entire Islands were literally vaporised. Now the Marshalese face a new threat, also at the hands of others – Climate Change.

Mr Loeak described that as the Sea Level rises, there is no higher ground to retreat to; king tides and droughts are regular. “In June 2013 during a king tide, a State of Disaster was declared, but aid could not be landed as the airport sea wall had collapsed; 1000 people were left homeless”. The situation is dire, and Mr Loeak accepts that the cycle of Typhoons and drought will soon make the islands unlivable. He could dwell on the hopeless situation and the daily tyranny of a changing climate. However not, Mr Loeak refuses to become a Climate Change refugee, he describes how Marshall Islanders will not stand down from the fight against Climate Change, for if they do, they will lose their identity, their language, culture and history. Instead they have a resolve to make new history where they will set an example to the world of how to adapt, retain their culture and continue to advocate for urgent action to reduce carbon emissions. The Marshallese existence is in the balance; they are standing up to this oblivion with optimism and a stoic attitude.  Loeak is on a mission to find and harness technologies that can aid their adaptation, such as Sundrop farms (Australian warehouse farming technology using renewable resources) and any other technology that can be part of a Marshall Island continued existence solution.

Mr Loeak humbled me to my core. I empathised with their plight but found it difficult to see the hope, yet alone pull together optimism. Since November, I have begun to appreciate Mr Loeak’s strength and resolve and have tried projecting a similar situation onto an Australian Climate Changed future. What will we do in our climate changed future? I hope that we can be as resolute and optimistic – I see that it is the only way. We must act now to meet our carbon reduction targets, and we must help others in their adaptation efforts. We can create shared value and once again use the Marshall Islands to test new technology, but this time for a better world.