For a number of years now, Edge Environment has made the commitment to bring about more good by donating $300 a month to a charity and allowing a different employee each month to nominate their chosen charity. In Australia there are approximately 56,000 registered charities and they make up a diverse sector working across Australia in a broad range of areas, including health, education, social welfare, religion, culture, human rights, the environment and animal welfare. This month I felt privileged to have that responsibility but also a little overwhelmed with so many needy causes out there. With the recent fire devastation across our land, it was difficult to look past these associated charities and even with the use of Edge’s Bushfire Decision Tree, it was still a very difficult decision. I have been living in Australia for 14 years having emigrated from Ireland. I’m a country girl, the youngest of five children who grew up on the land and experiencing firsthand the devastation within a household (and of course a community) during a tough farming year, never mind 4 or 5 tough farming years in succession. I believe in the value of community, the value of kinship and the necessity for community and family spirit for rural family and farming success. Because of this, I would like to nominate Edge’s Make More Good charity donation for the month of January, to Drought Angels. Drought Angels is a charity that embraces and understands farming communities by providing a unique service for which it is has become well known within the rural sector.  It’s a small charity run by big hearts, who offer a listening ear, a warm hug and personalised support given to each family ensuring that Australian farmers know it’s not a handout, but a ‘Thank You, for all they do to put the food on our tables’. 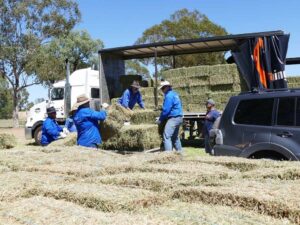 Through direct personal contact with the farmers, Drought Angels has earnt a reputation for providing personalised, heartfelt and discreet assistance for farming families affected by natural disasters Australia wide, including drought, flood and fire damage. They help those who would not normally reach out but prefer to battle it alone, which can lead to severe depression and in some cases suicide.  Drought Angels provide one-on-one support which aides in ‘breaking down the barriers’ of a proud demographic who quite often have never received a hand up. Their level of support consists of providing stock feed, financial support via pre-paid visas and local produce vouchers from within the communities, moral support through personal face to face or phone contact, and referrals to other support networks. Their support is individualised, meaning everything they do is personal, requires time, attention and ultimately makes people feel like people.

There’s no doubt that with the difficult weather, fire and environmental conditions in recent months nationwide, the work of Drought Angels on the ground is ever important and will prove to be a continued organisation of support, spirit and practical assistance across communities. If you’d like to support the work of Drought Angles, please visit their donation page here.