Found in many common office and household items, Persistent Organic Pollutants (POPs) can cause a range of negative health effects.  Whilst their use in manufacturing is now banned in Australia, POP-containing materials are still widespread in Australia from prior manufacture and imports.  Their replacement with less hazardous or inert substances is being prioritised to reduce impacts to human health from installation, use and disposal. 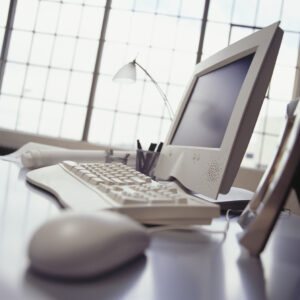 Persistent Organic Pollutants (POPs) are additives found in common building materials and office fit-outs. Although still widespread globally, POPs have been on the agenda of public grievances for decades and are common across Australian offices, homes and commercial
spaces. POPs have recently undergone renewed scrutiny in the European Union, including an outright ban on certain variants which has resulted in alternative products becoming more commonplace.

Historically, POPs have been added to materials including insulation, electronics, textiles, treated timber, plastic, rubber, wall and floor panels for product safety against flammability. However, human health effects from exposure to POPs causes a risk of chronic and acute toxicology and bio-accumulation due to fast absorption in the body. The end-point health risks include cancer, central nervous system damage and endocrine disruption. The risk of POP release from materials is present throughout the product life cycle including manufacturing, the usage of the product and the end-of-life stages, affecting workers and the users or occupants. Additionally, for building and construction workers, disturbances to the material such as power-drilling which generates high amounts of heat through friction will cause further risk of hazardous airborne particle exposure.

International concern about POPs led to the Stockholm Convention in 2001, which has 127 countries as signatories, including Australia. The outcome was agreement on measures to eliminate the production and use of unintentionally produced POPs formed through thermal processes; to provide financial resources to eliminate unintentionally produced POPs; and to manage and dispose of POP waste in an environmentally sound manner. Since 2001, Australia has deployed the Global Monitoring Plan for Persistent Organic Pollutants. However, use of POP-containing materials is still legal and widespread as we import common everyday products from around the non-signatory countries.

So why has response been so lacking in Australia? It has taken many years to develop cost effective alternatives to POPs, as it is difficult competing with matured technologies. In addition, uncertainty and non-standardised material specifications from imported products cause buyers difficulty in knowing whether POPs are present during product selection. These two factors combined have seen POP remain abundant in our offices, homes and commercial spaces despite efforts from the Stockholm Convention since 2001.

Breakthroughs in the development of alternatives have seen new products on the market that replace POPs with much lower risk to human health. For example, PaxymerTM is a new product providing a non-toxic coating for electronics, which can be used on mouses, keyboards and electrical cabling. Similarly, a new brominated polymer flame retardant (BRF) including butadiene styrene brominated co-polymer, and TBBPA-bis brominated ether derivative are alternatives that have been found to be less hazardous to both human and environmental health despite being found to be persistent and bio-accumulative. These alternatives are already being substituted in products where certain types of POPs have been banned in EU member countries and are proving cost effective.

What do we need to do?

Materials already built into structures will be a part of the building until its deconstruction, however the public needs the building and construction industry to lead the way in demanding non-POP alternative products where possible and promote POP avoidance in their media and communication channels. The take-home message is: