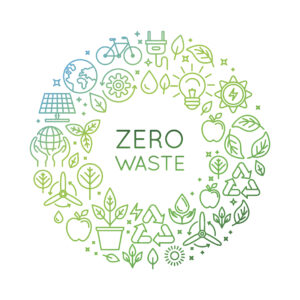 When you hear the words ‘circular economy’ for the first time, it sounds intangible. Once you know more, it becomes one of the most logic foundations of sustainability. For Edge Environment’s Gary Foster, contributing to the circular economy is the driving force of his career.

Have you ever read or seen something that changes your whole perspective? This happened to me when I read the book Cradle to Cradle by Bill McDonough and Michael Braungart. It described a new environmental paradigm: a philosophy and a way of thinking, of designing, using and remaking materials in a way that was non-polluting and abundant – being good rather than being less bad. It was so refreshing to tell businesses they could do more of something rather than less!

This is the premise of the circular economy movement, which includes international organisations such as the Ellen Macarthur Foundation and locals such as Edge Environment, operating through various NSW state government-funded programs.

The ‘cradle to cradle’ methodology is holistic in approach: it focuses on more than just one aspect of environmental management. Along with carbon emissions reductions, it also includes safety, pollution, energy, the use and re-use of materials and water etc.

When I read Cradle to Cradle, I was working for a UK government agency whose sole remit was to facilitate the creation of the low carbon economy. This work was all very good, however, some ideas presented for R&D funding illustrated the single-minded focus at the time. One university suggested the creation of a large material strip that would expand when hot and contract when cool; thus enabling automatic ventilation dependent upon outside air temperature. Good in terms of energy savings, however, its manufacture relied upon scarce materials and it would have been unrecyclable at the end of life. Clearly, this solution wasn’t a robust environmental product.

NISP (National Industrial Symbiosis Program) was at the other end of the spectrum, fostering the same values as the ‘cradle to cradle’ circular economy philosophy. In the program, there were thousands of case studies where the productivity of resources was maximised and significant embodied carbon savings were also achieved concurrently, e.g. through seeking a recycling option rather than disposal of certain products. There are many case studies showing how plastics, paper, cardboard, tyres, metals, timber, ceramics, glass, aggregate and certain finished products have been diverted from landfill to continue productive use in the economy.

The circular life for me

I was so inspired by the ‘cradle to cradle’ philosophy that I joined a company that delivered the NISP program in three regions of the UK. NISP was essentially a business opportunity network of thousands of businesses or member organisations. It used the business opportunity to drive the collaboration of organisations and sectors, often in new ways. The program’s success took me across Asia, Europe and to Australia. I’ve been here nearly two years and have maintained my interest and contribution to circular economy-style solutions through Edge Environment’s involvement with the NSW EPA’s Circulate Industrial Ecology Program, recently being involved with the building products sector in particular.

Australia is a dynamic place to do business; there’s a solid network of organisations and individuals who are at the leading edge of sustainability and circular economy thinking. I find most of the building blocks to make change happen are present in Sydney, from entrepreneurs, leading university departments, the financial community, businesses and supportive government agencies. They say that the pace of technological change and disruption will be twice as fast in the next seven years as it has been since the turn of this century. It is an exciting time to be involved with sustainability, trying to surf the wave of disruption to ingrained, outdated behaviours. I look forward to being part of an even bigger positive catalyst for change in the coming years.